The Most Overreported and Underreported Stories of 2019

The media herd followed its usual course in 2019 in trampling over a lot of the same ground on big stories—and in the process often ignoring other important developments or trends around the world. Here is Foreign Policy’s assessment of the stories the mainstream media dwelled too much on—and what we missed.

The Most Overrated Stories

Placards featuring Britain’s Labour Party leader Jeremy Corbyn and Britain’s then-Prime Minister Theresa May in the colors of the European Union lean against a pillar near the Houses of Parliament in London on April 25. DANIEL LEAL-OLIVAS/AFP via Getty Images

Donald Trump’s impact. The leader of the free world spent another year seemingly trying to do as much damage as he could to the free world, especially to Ukraine. But after three years of this behavior, it’s become clearer that there may well be only so much harm one U.S. president can do, especially now that the House of Representatives has sent a message to the world, by making Donald Trump only the third U.S. president to be impeached, that even many Americans find his behavior toward other nations to be unacceptable. The threat of Trump’s trade wars to the global economy was perhaps the most-hyped theme of 2019, but as the year closed out, economic trends still looked fairly positive. Though investment and demand remain subdued, global growth was expected to tick up as a partial China deal and passage of NAFTA’s successor ease the way. Despite impeachment at home and fears of confrontation abroad, no major crises have erupted—though North Korea’s patience with Trump may be quickly running out. The emerging theme in 2020, perhaps, will be the normalization of Trumpism as well as Brexit, which now looks set to happen by Jan. 31 following British Prime Minister Boris Johnson’s massive parliamentary victory in December. But with normalization comes, to some degree, stabilization. Just as an individual eventually learns to live with a chronic but nonfatal disease, so the global system is doing with the 45th president and his neonationalist fellow travelers.

The threat from Iran.  Few media outlets noted that the greatest threat to the stability of the Middle East in 2019 came not from the supposedly fearsome Islamist regime in Tehran but from a NATO ally, Turkey, which invaded Syria. Though it was blamed for a single attack on Saudi Aramco facilities, Iran did next to nothing in terms of aggression against Washington—apart from allegedly downing a U.S. drone—and was mainly occupied with addressing its own internal turmoil as its economy suffered under Trump’s renewed sanctions. A U.N. report in December even questioned the evidence indicating that Tehran was responsible for the Aramco attack. And yet by midyear, led by Trump’s hawkish national security advisor, John Bolton, and egged on by Israeli Prime Minister Benjamin Netanyahu, Washington appeared to be on the verge of war with Iran, to the point where U.S. senators warned the conflict was becoming the run-up to the Iraq War all over again. “Sixteen years after the U.S. invasion of Iraq, we are again barreling toward another unnecessary conflict in the Middle East based on faulty and misleading logic,” two Democratic senators, Tom Udall and Dick Durbin, wrote in an op-ed in the Washington Post. Even a senior British military official, Maj. Gen. Chris Ghika, the deputy commander of the U.S.-led coalition fighting the Islamic State, said he saw no increased risk from Iran or allied militias in Iraq or Syria. Bolton was later fired.

The imminent death of Europe. Almost since its inception in 1992, the European Union has been slated for some future break-up—and never so much in the months leading up to the parliamentary elections in May, when the major media opined endlessly that right-wing populist forces appeared ready to fatally divide the EU. Instead, there was evidence of a new pluralism, with greens and centrists doing well and even far-right groups such as Marine Le Pen’s National Rally in France and Matteo Salvini’s League in Italy showing a new willingness to work their agendas within the union. Thus, as we’ve seen going back to the Greek financial crisis a decade ago, the center in Brussels has continued to hold.

Maduro’s certain departure. After Venezuelan National Assembly President Juan Guaidó declared himself interim president on Jan. 23, months of media anticipation ensued that President Nicolás Maduro would fall and democracy would triumph over the mess that Chavezism had made of the country. U.S. National Security Advisor John Bolton said the “criminal regime” of Maduro would soon collapse. Elliot Abrams, Trump’s Venezuela envoy, said in July that Maduro would “absolutely” fall by year’s end. Didn’t happen. By the end of April, Guaidó failed to rally support in an uprising. And by the time 2019 closed out, he was rapidly losing support, and Maduro had handily outlasted even his fellow socialist Evo Morales of Bolivia.

The Most Underrated Stories 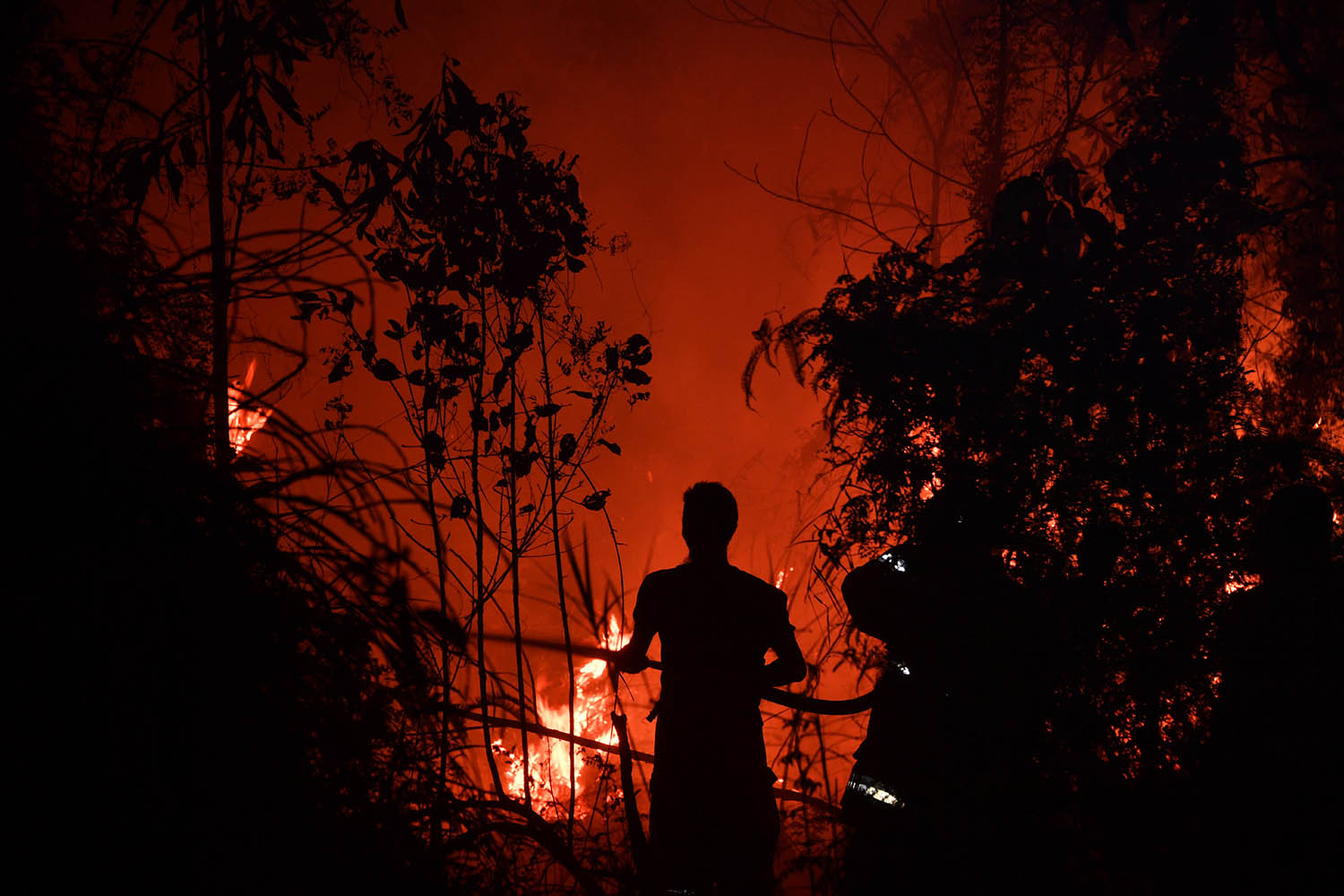 Indonesian firefighters extinguish a fire in Pekanbaru, Riau province, on Sept. 13 as the number of blazes in Indonesia’s rainforests jumped sharply, adding to concerns about the impact of wildfire outbreaks worldwide on global warming. ADEK BERRY/AFP via Getty Images

Trump’s undiscovered money trail. Little noted by the media in the run-up to Trump’s impeachment in December was a confession that almost seemed unprecedented: Trump actually admitted he did something wrong that may have made him criminally liable. As part of a settlement, the president paid eight charities a total of $2 million, while the New York State attorney general said Trump admitted “he misused funds raised by the Donald J. Trump Foundation to promote his presidential bid and pay off business debts,” according to the New York Times. And yet even that was only a small part of a larger story that had been much anticipated in 2018 when the report by special counsel Robert Mueller on Trump’s alleged collusion with Russia was being prepared, but which much of the media later ignored or played down. Although Trump’s businesses and personal wealth depended for years on money from Russia and the former Soviet Union, Mueller and other investigators barely touched on that. As former Ambassador to Russia Michael McFaul told Foreign Policy, “The money trail is the most important part of the unanswered questions. Were these just innocent transactions, or were these done by Russian proxies to gain influence?”

The conduct of the “forever war.” What is now routinely referred to as the United States’ “forever war” has disappeared almost entirely not only from the front pages but from news coverage altogether. From Afghanistan to Iraq to Syria, Libya, the Horn of Africa, and other places unknown, the United States and its Western allies are fighting a diffuse global conflict that most people don’t understand or know much about, that most legislators in Congress want little to do with (at least until very recently), and that the White House and Pentagon have turned into quotidian routine. And yet people are dying in this war in significant numbers—many of them innocent—and there are no casualty lists, no public after-action reports, and few follow-up investigations about collateral damage. The lack of attention to this story may be the subtext of the Taliban’s surprising success in Afghanistan. Since the disbanding of the International Security Assistance Force there in 2014, when Washington took full control once again, civilian deaths have mounted appallingly, experts say. And the broader war appears to be making little progress, especially in West Africa: Foreign Policy’s Robbie Gramer reported in late December that the United States is shifting to diplomacy, planning to appoint a new special envoy to the Sahel.

The rise of the global digital monopolies. People fret about it in op-eds, but no one seems to have any idea what to do about the aggressive buyouts of rival platforms by Facebook, Google, and Amazon. In mid-2019, the U.S. Justice Department announced a broad antitrust review, but neither the Trump administration nor Congress appears eager to push the matter too hard. Meanwhile, the digital giants are perfecting the art of what the Harvard Business School scholar Shoshana Zuboff calls “surveillance capitalism,” exploiting the data of their millions of users for free and in the process shattering communities, while Facebook founder Mark Zuckerberg and others absolve themselves of responsibility for fact-checking. Where is Teddy Roosevelt, the original trust-buster, when you need him?

Climate change. This is a perennial, folks. A collective yawn appeared to greet the failure of the COP 25 United Nations climate change conference in December, despite two weeks of talks. With the United States only looking on since Trump’s announced withdrawal from the Paris climate agreement—which will be finalized in 2020—diplomats could not reach consensus on major sticking points to implement the pact. Meanwhile “things are getting worse,” said Petteri Taalas, the secretary-general of the World Meteorological Organization, which in December issued its annual state of the global climate report. Global warming is producing more devastating wildfires, drought, and flooding in unexpected places—even a heat wave in Greenland. Yet while the world burns, leaders are failing to make progress, and there are almost no front-page headlines to bear it out.

What I Wasn’t Told About Climate Change With Luca Rossi

Coral reef cover, biodiversity, fish catches have declined by half since the 1950s – Watts Up With That?