The upwelling ocean phenomenon that led to hundreds of fish dying and washing up on the eastern and southern coasts of the Eastern Cape was triggered by global warming, and humans can prevent more fish from dying by reducing their carbon footprint.

This plea was made by Professor William Froneman, the head of the Zoology and Entomology Department at Rhodes University, as fishing and coastal communities along the province’s coast were left stunned by the disturbing sight of rare ocean species and fish that have been washing ashore since last Tuesday.

The fish were killed by a temperature shock after sea temperatures dropped from 24 to 12 degrees Celsius.

This phenomenon, known as an upwelling, is a process in which deep, cold water rises towards the surface.

With winds blowing across the ocean surface, pushing water away, water then rises up from beneath the surface to replace the water that was pushed away. 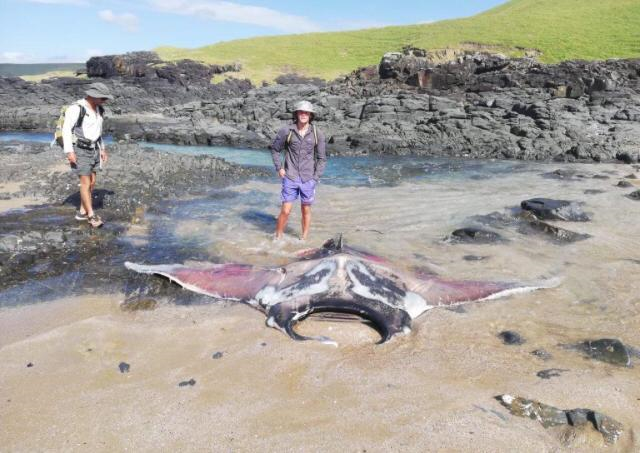 While upwelling was a natural phenomenon, global climate models suggested the incidence/intensity of upwelling events along the South African coastline was likely to increase in response to global warming, said Froneman.

Between last Tuesday and Saturday, Wild Coast communities saw, among others, two giant oceanic manta rays – including one carrying a 60kg pup – a dusky shark, a 2.1m carcharhinus and a whole host of other unknown types of fish washing up.

Resident Etienne Kapp reported a squid species washed up on Bonza Bay Beach and was collected by the museum. A squid species washed up at Bonza Bay beach on Wednesday and was reported by Etienne Kapp and collected for the East London Museum by Kevin Cole, who is pictured.

“More species were found and the list of different types of fish has also been added to,” said Cole.

“Global warming represents a key ecological threat to ecosystem functioning and ultimately, human well-being. There is a clear need to reduce our carbon footprint by reducing our total carbon emissions.

In order to address this threat, a global response is required due to the inter-connectivity of marine and terrestrial systems,” advised Froneman.

He warned more fish would die in the coming days. An “unusual” three-tooth puffer was found at Gonubie beach.

“These intense upwelling events are typically associated with large temperature fluctuations in the surface waters that may exceed the thermal thresholds of numerous invertebrate and fish species in the region.

These temperature fluctuations may result in behavioural changes and ultimately the death of marine organisms,” said Froneman.

Cole added the intensity of the recent upwelling in the Eastern Cape coastline had raised eyebrows.  “This was a natural phenomenon which occurs along this part of the SA coast. However, the temperature difference [warm to cold] was quite severe in a short space of time, more so than with some similar previous events of this nature.”

Cole added his team was still trying to determine the number of different species that have washed ashore. The Department of Environmental, Forestry and Fisheries confirmed on Monday that sequential a marine heat wave and cold snap had resulted in the washout and mortality of fish, invertebrates and seaweed on the east and south coast.

When asked if the incident was linked to global warming, the department said: “The broad answer is yes, as wind regimes and the Agulhas current have been predicted to become more turbulent under the influence of climate change which would imply that such meanders and associated marine heat waves and cold upwelling events could increase in frequency in the future.”

Aspirin Helps Protect against Covid-19 – Watts Up With That?

saving the earth with blockchain Technology

Aspirin Helps Protect against Covid-19 – Watts Up With That?

World’s first, satellite-based monitoring system goes global to help save coral reefs – Watts Up With That?