The melting of the polar ice caps has often been portrayed as a tsunami-inducing Armageddon in popular culture. In the 2004 disaster movie The Day After Tomorrow, the warming Gulf Stream and North Atlantic currents cause rapid polar melting. The result is a massive wall of ocean water that swamps New York City and beyond, killing millions in the process. And like the recent polar vortex in the Northern Hemisphere, freezing air then rushes in from the poles to spark another ice age.

The premise is obviously ridiculous. Or is it? Rapid glacial retreat in Alaska in 2015 did in fact trigger a huge landslide and a mega tsunami that was nearly 200 meters (650 feet) high when it hit shore. Few knew or cared because it luckily happened at the end of the Earth where no one was living.

Many of us might believe we won’t be directly impacted by the breakup of trillions of tons of ice due to global heating. We figure that unless we live on a small island in the Pacific, or have a house on the beach, it’s not our problem.

While it’s true that the glaciers, ice caps and ice sheets covering 10% of the Earth’s land mass are mostly in the middle of nowhere, their rapid breakup has a cascading effect.

Consider how all the extra fresh water in the ocean is diluting salt levels. And how that messes with the balance of the Gulf Stream, one of the world’s most important ocean currents. The result is climate extremes, especially tropical storms and hurricanes in places like the Gulf of Mexico, but also more frequent floods and droughts on both sides of the Atlantic. It’s gonna suck for a lot of people.

To put this meltdown in context, the rate of ice sheet retreat has increased nearly 60% since the 1990s. That’s a 28 trillion ton net loss of ice between 1994 and 2017. Antarctica’s epic ice sheet, the world’s largest, and the world’s mountain glaciers have suffered half of this loss. 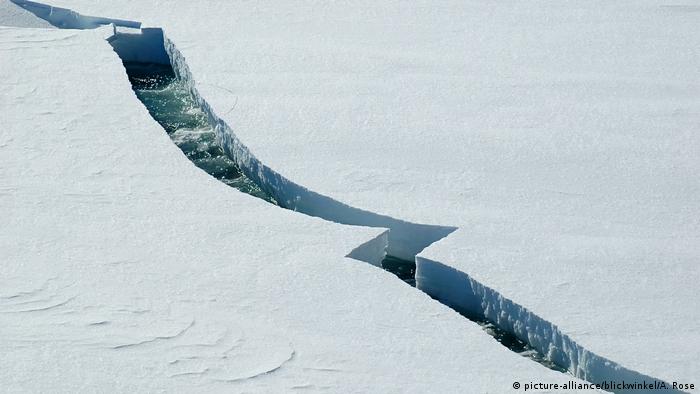 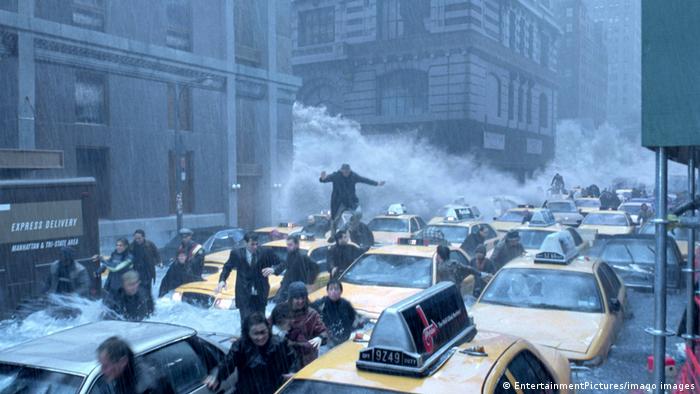 This sudden sea level rise in ‘The Day After Tomorrow” won’t happen any time soon, but if global warming isn’t mitigated, flooding will pose a greater threat by 2100

OK, that sounds like a lot — but so what?

Again, it’s the domino effect that’s worrying. With temperatures rising twice as fast in the Arctic — the world’s air conditioner — than anywhere else on the planet, the heat is not just melting ice. It’s also weakening atmospheric air currents known as the jet stream. In other words, more bad news for the weather.

The polar vortexes that have been freezing Europe and North America in recent years are related to a weakened polar jet stream — a scenario that triggered the sudden ice age in The Day After Tomorrow.

The cold might be welcome as the planet heats up, but here’s the thing: Arctic regions are heating up, too. Which means the ice that’s supposed to be reflecting the sun’s energy away from Earth isn’t as much anymore, leaving the sea to absorb this heat.

No surprise then that in 2018 the winter ice sheet in the Bering Sea bordering Alaska was at its lowest levels in over 5,000 years .

Fish, sea bird, seal and polar bear habitats are also disappearing with the ice. Indigenous communities in the Arctic who once hunted in a thriving frozen ecosystem are being upended — their houses are also falling in the sea as the lack of ice causes the coast to erode.

Sure, it’s an underpopulated part of the world. But consider also the rapid thaw of permafrost on the Siberian tundra. One of the world’s biggest carbon sinks, the tundra is now releasing greenhouse gases like methane that were long trapped below the frost.

Some scientists have predicted that by century’s end, 40% of permafrost regions will have disappeared, meaning they will no longer retain, but will also release carbon dioxide — and we’re talking more than is already in the atmosphere right now. As global heating is turbocharged, bye bye to more ice.

Which leads us to the elephant in the room: rising sea levels.

How bad could rising sea levels get?

So let’s start with the worst-case scenario — and remember the culprit here would be ice sheets and glaciers on land.

If the fast-retreating Antarctic ice sheet, the world’s largest, completely melted, the world’s oceans would rise by about 60 meters (about 200 feet). That would be Armageddon and London, Venice, Mumbai and New York would become aquariums.

Don’t panic, though, this won’t happen any time soon. But if emissions aren’t sufficiently scaled back to mitigate climate change, some researchers reckon oceans will definitely rise by at least 2 meters by the end of the century. That’s still enough to swamp the several hundred million people living below 5 meters above sea level. Another 350 million or so living higher up would have to relocate to escape regular coastal flooding.

Maybe, but that wouldn’t be the end of it. The world’s mountain glaciers, which number roughly 200,000, are melting much faster than they can accumulate these days. Problem is, though they only cover less than 0.5% of the Earth’s landmass, these “water towers” provide fresh water to about a quarter of the world’s population.

Glaciers also feed the rivers that irrigate the crops which hundreds of millions of people across Asia, South America and Europe depend on for their survival. So without them, many people will suffer from both thirst and hunger. Scientists say water tower retreat has put almost 2 billion people at risk of water scarcity.

Right now, cities like Santiago in Chile are watching a big part of their drinking water supply literally dry up as glaciers in the nearby Andes retreat. Meanwhile, the European Alps that supply so much fresh water across the region have shrunk by about half since 1900 and will be almost ice free by century’s end if nothing more is done to curb warming. 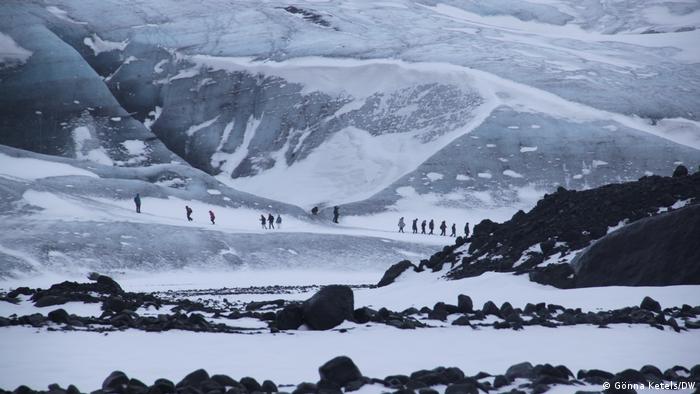 Glaciers play an important role in water cycles across the world. Pictured here is Iceland’s Vatnajokull glacier, which covers about 8% of the island

OK, is there anything that we can do?

Like global heating in general, the best way to mitigate the meltdown is to stop polluting the atmosphere with global warming-inducing carbon.

Of course, the process can’t be reversed overnight. Even if people across the world stopped using fossil fuels tomorrow, one-third of the world’s remaining glaciers would still disappear.

So to save some amount of precious polar and glacial ice, we need to avoid the temperature rise of over 3 degrees Celsius (5.4 Fahrenheit) that the UN says is inevitable if governments don’t step up climate targets. If the world can decarbonize by 2050, it might be possible to preserve around one-third of the current glacial mass by century’s end. That would take both government action and a radical commitment to reduce our individual carbon footprint.

The future remains uncertain. But it’s likely that if melting isn’t slowed real soon, disaster movie scenarios might not look so ridiculous to future generations.

Weekly Climate and Energy News Roundup #447 – Watts Up With That?

Weekly Climate and Energy News Roundup #447 – Watts Up With That?

Most fossil fuel must stay in ground to keep warming below 1.5°C: study

The Heresy Of Heat- And Cold-Related Deaths

If we don’t act, climate change could devastate Coachella Valley, too