Invisible Disasters Left in the Wake of the Visible Storm

One limb of Sardar Patel’s statue!

The meme surfaced on social media following a federal relief package of Rs 1,000 crore for aid and relief of those affected by Cyclone Amphan that hit the eastern coast of India on May 20, 2020. The unprecedented devastation unleashed on more than 10 million people across Bengal and Odisha by the strongest cyclone to hit the region in 50 years probably deserved a little more altruism, argued netizens who circulated the meme.

Cyclone Amphan – gushing at 170 km/hour – was by far more intense than Aila, the fabled cyclone that struck the same coast on May 25, 2009, with a wind speed of 110 km/hour. Both the cyclones have been particularly harsh on the Sundarbans region in West Bengal. While Aila decimated the archipelago spread across 6000 sq km, Amphan has virtually razed it this time.

Sundarbans, an internationally famous biodiversity hotspot and a UNESCO heritage site, could never quite recover from a series of smaller and severe disasters since 2009. About two million critically vulnerable out of a population of five million, who call the Sundarbans home, have been perpetually locked in a vicious disaster-damage-recovery cycle for over a decade now.

In the meantime, three of the 52 human-inhabited islands have been completely submerged while a few more are disappearing fast. Cyclone Amphan probably is the most lethal nail plunged into the heart of this global poster boy of wetland tigers and mangrove conservation.

Sundarbans’ international fame for its biodiversity is precisely the reason behind the institutional derision, humiliation and apathy towards its residents. The human tragedies here, from the infamous Marichjhapi massacre in 1978 to Aila, have never perturbed the mainstream national media.

So, it won’t be quite surprising if few would know that the region is arguably the worst victim of global warming and climate change in South Asia, even worse than the small island nation-states in the Pacific. Despite catastrophic impacts of climate change already evident in the region, enough data to project future environmental shifts and detailed analysis made by many scholars about an impending and imminent socio-ecological crisis in the region available, a comprehensive climate change adaptation policy has never been developed for the region, neither has any inclusive disaster management plan been developed for the region as a subset of adaptation strategy.

Political apathy towards the eastern part of the country in general and poor disaster governance in the country have systematically marginalised millions of acutely vulnerable coastal population in the Sundarbans.

But Cyclone Amphan threatens to induce a human crisis of unimaginable proportions and savage cruelty, something that can pulverise even the indomitable residents of the Sundarbans.

Outmigration to cope no longer a hope or option

Residents of the Sundarbans have always been left to their own devices in the aftermath of cyclones. Battered and bruised with amazing regularity by storms of various magnitudes and numerous smaller hazards such as erosions, they always believed in being atmanirbhar, known as autonomous adaptation in the academic jargon.

Migrating out and working elsewhere in the country to recover the immediate losses and damages is what they have done after cyclones Aila, Fani and Bulbul. The COVID-19 pandemic will no longer allow labour outmigration, killing the most preferred household-level coping mechanism in the Sundarbans. Initially involving young men and boys, young women have been increasingly joining them to travel to Kerala, Gujarat, Tamil Nadu, Maharashtra (mostly Mumbai and Pune) in search of some quick cash to recover the damages caused by the disasters.

The rate of outmigration is so high that every household has two or more migrant members across the Sundarbans. Just as large number of migrant workers were returning to the Sundarbans amidst COVID-19 lockdown, Amphan struck. Seeking a temporary job in another part of the country to help absorb the immediate shocks – that include a fully or partially destroyed homestead, salinisation of cultivable land and ponds, death of cattle, destroyed food reserves, education materials for children in school – would no longer be possible for those who have already returned. 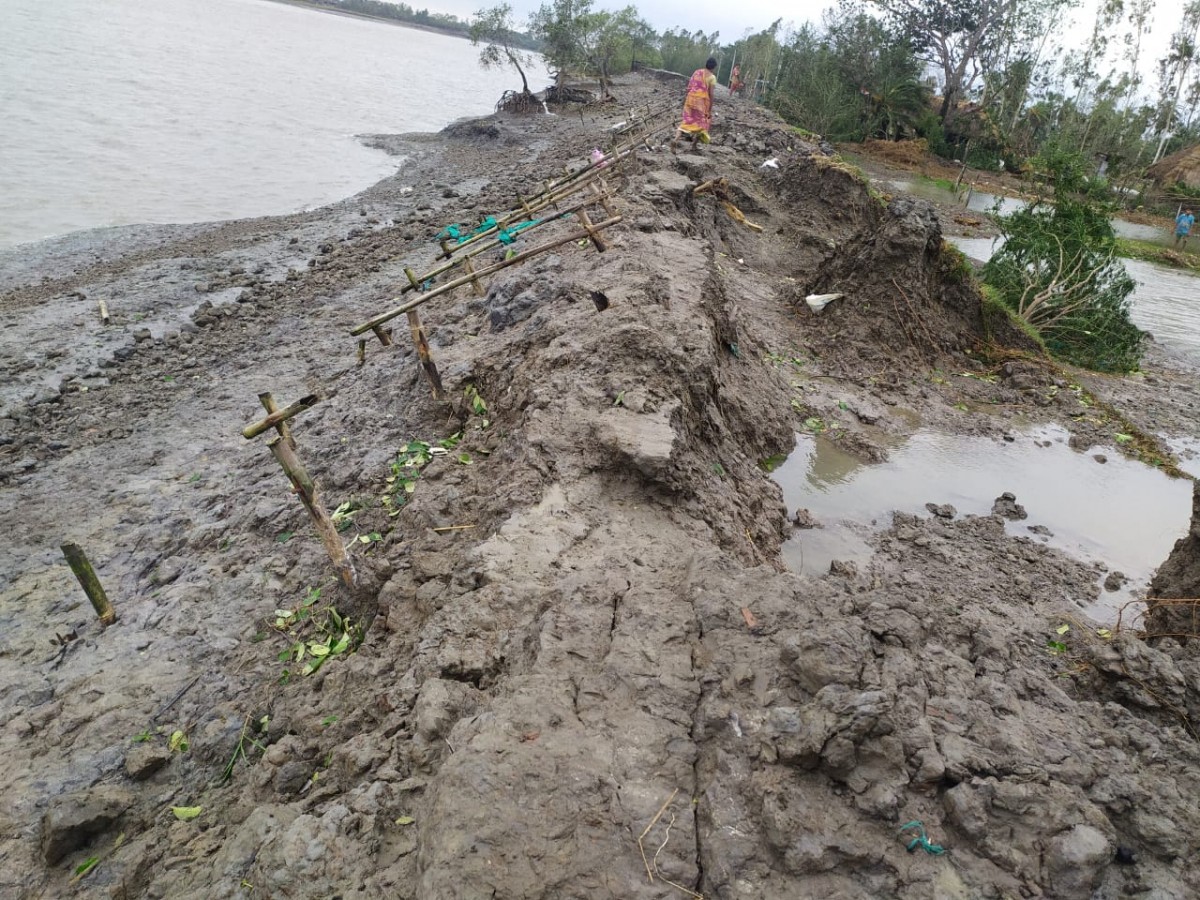 Even if travelling out is allowed, the process itself is staggeringly complicated and often expensive because of limited or non-availability of trains, buses or any other mass transit that the migrants use. The sceptre of doom is looming so large that many say that the self-reliance or atmanirbharta they always practised – not by choice but by force – cannot help them even crawl out the tragedy this time.

This atmanirbharta in coping with disasters, however, exposes a key weakness in India’s reactive disaster management processes that almost exclusively comprise relief and aid (not even rehabilitation). A consistent resilience-building exercise over a protracted temporal scale enables and equips vulnerable populations, potentially limiting the damages from a severe weather event in the first place and then helping them recover quicker from the shock.

Resilience is now a key concept in mitigation of risks, particularly those induced by climatic changes – both slow-onset shifts in the ecological systems and sudden ruptures such as cyclones. Unabated warming of the globe that triggers more acute and abrupt climatic shifts demands a stronger resilience-building exercise. In a developing country such as India, resilience-building needs to be organically internalised in our development planning.

For example, resilience building can be strategically coupled with the NREGA programme. Ample research data is now available that link more frequent cyclones along the eastern coast of India or Sundarbans to warmer Bay of Bengal, the data also forecast future trends – a further rise in this frequency. Instead of employing such evidence to facilitate resilience planning or policy, our disaster management has remained incarcerated in the idea of providing post-disaster relief, characterised by unaccountability at best and corruption at worst.

Mainstreaming resilience-building however, demands addressing structural violence that determines vulnerability of populations in the first place. Even if restricted within ecological parameters, marginality pushes populations towards greater physical vulnerability – to live along high risks zones such as low-lying coasts or landslide-prone high mountains or in filthy slums. 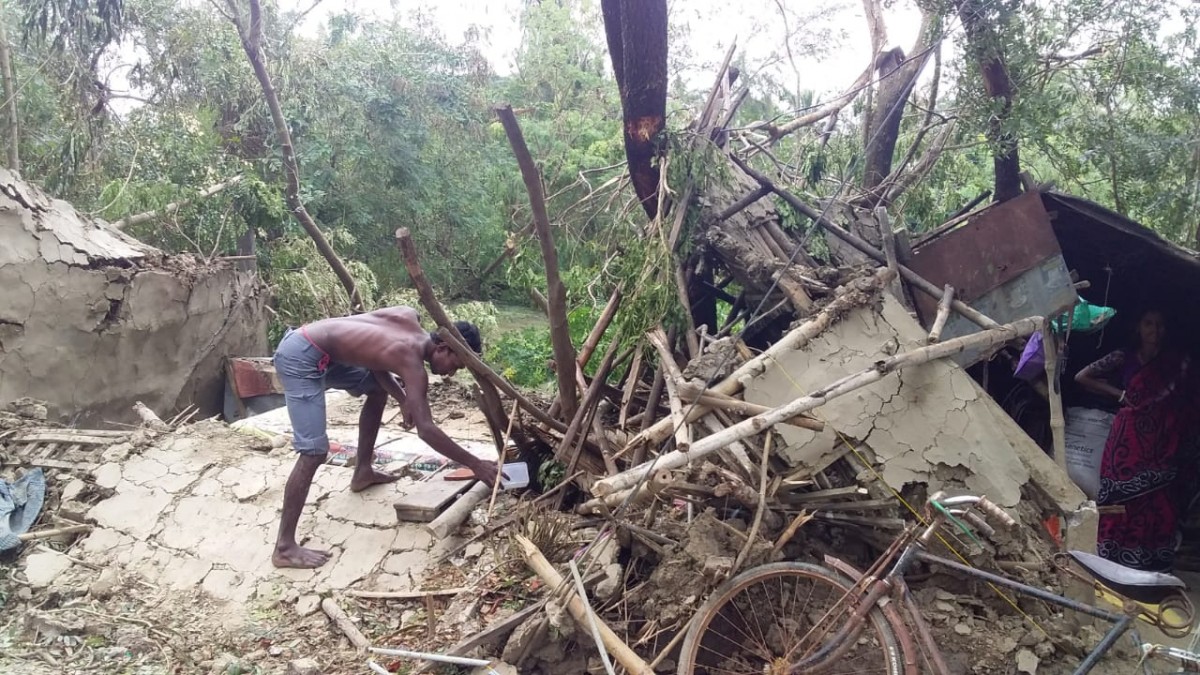 As Rob Nixon, in his seminal work titled Slow Violence and Environmentalism of the Poor explains, this violence is characterised by obscurity, a large part of which is representational – the problem of devising “stories, images, and symbols adequate to the pervasive but elusive violence of delayed effects.” This is exactly what has happened with the Sundarbans, a victim of discursive marginality.

Tigers, tourism and Kolkata’s saviour: Sundarbans is never for its own sake

Sundarbans is a tigerland, a tourism paradise and a weekend getaway in the popular imagination. For Kolkata-based elite environmentalists, it is a cyclone-shield for Kolkata or provider of ecosystem services to the city, along with its charming tigers. So much that the locals felt they were mere tiger food, writes Annu Jalais in her book The Forest of Tigers. While this discursive marginalisation has been ubiquitous over the decades, Cyclone Amphan has reinforced it. Its scant coverage in the national media is focused almost entirely on the miseries in Kolkata.

For the local Kolkata-based media, the city’s devastation was always more important and urgent – after all 1978 flood was the last time when such a catastrophe hit the city. The neglect and apathy towards the humans of the Sundarbans are sustained in the post-Amphan media coverage and discourse, despite it being the worst tropical cyclone in 50 years, which made direct landfall in the archipelago.

For most of the national and regional media, the 4.5 million residents of the Sundarbans were almost Zomias, a term coined by James Scott to describe populations deliberately remaining beyond the scope of the State’s governance. Wherever the region did feature, it was for its failure to save Kolkata. Because the cyclone’s landfall was between Digha and Sagar this time, two thickly populated regions without any mangrove cover, which had saved the megacity in the earlier ‘cyclonic’ occasions such as Aila, Fani and Bulbul. It might not be surprising if very soon, an expensive afforestation programme is launched in Sagar and Digha to save Kolkata!

So, for the affected population of the Sundarbans, relief, aid or assistance will not improve in absence any media pressure. What’s more, they cannot even be atmanirbhar this time. Crammed in relief centres damning social distancing of all kinds, even hope seems a luxury for these few million Indians.

Aditya Ghosh is an associate professor at Jindal Global University and a research associate with the University of Heidelberg where he has worked extensively on disasters induced by climate change along the Indian coasts. He is the author of Sustainability Conflicts in Coastal India: Hazards, changing climate and development discourses in the Sundarbans.

Greta Thunberg: The Perfect Hero For An Unserious Time

If CO2 Emissions Are Cut To Zero, Earth Will Still Take More Than A Decade To Cool Off