Hurricane Ida rapidly spun itself up to a Category 4 tropical cyclone—maximum sustained winds at 150 miles per hour—just before it made landfall on the coast of Louisiana on Sunday morning. Such rapid intensification is consistent with the effects of man-made climate change on hurricanes. The recently released Sixth Assessment Report (AR6) from the Intergovernmental Panel on Climate Change noted, “It is likely that the proportion of major (Category 3–5) tropical cyclones (TCs) and the frequency of rapid TC intensification events have increased over the past four decades.”

Contrarily, recent research does not yet detect a significant increase in the intensity or frequency of Atlantic hurricanes striking the United States. Some researchers suspect that particulate air pollution combined with natural variation suppressed hurricane activity in the North Atlantic during the mid-20th century. On the other hand, the AR6 projects that “the total global frequency of TC formation will decrease or remain unchanged with increasing global warming (medium confidence). Basically, as a result of man-made warming, hurricanes and cyclones are expected to become fewer but more intense.

As the world continues to warm, the AR6 forecasts that “the proportion of intense TCs, average peak TC wind speeds, and peak wind speeds of the most intense TCs will increase on the global scale with increasing global warming (high confidence).” In addition, tropical cyclones appear to be becoming wetter. “Available event attribution studies of observed strong TCs provide medium confidence for a human contribution to extreme TC rainfall,” observes the AR6. Why? Because, among other things, near-surface atmospheric moisture content increases by about 7 percent for every 1 degree celsius increase in warming.

Hurricane Ida and its remnants have so far knocked out electricity to around 1 million homes and businesses and killed 6 people. In contrast to the Hurricane Katrina disaster (1,833 deaths) 16 years ago, New Orleans’ massively upgraded levees held, so the Big Easy escaped inundation this time. The protection afforded by the improved levees is an example of how increasing wealth and technological prowess over the past couple of centuries is enabling more and more of humanity to survive natural disasters.

Even as the world population nearly quadrupled, the global natural disaster death rates have plummeted, according to Our World In Data.

In fact, the annual number of people dying as a result of natural disasters has fallen by about 90 percent over the past century: 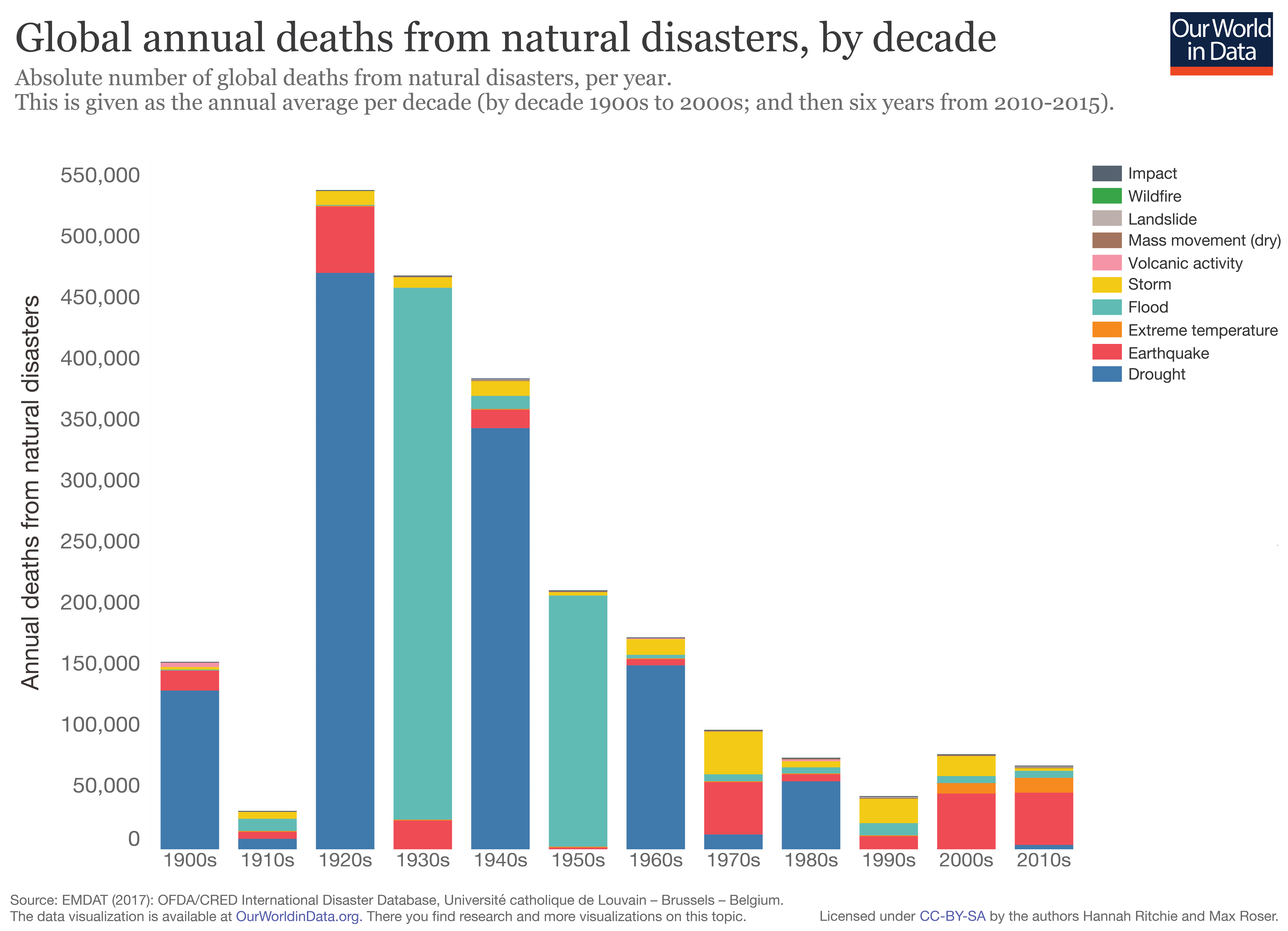 Deaths from weather and climatological events like floods and droughts have especially steeply declined over the past century. As University of Colorado environmental studies professor Roger Pielke, Jr. tweeted: 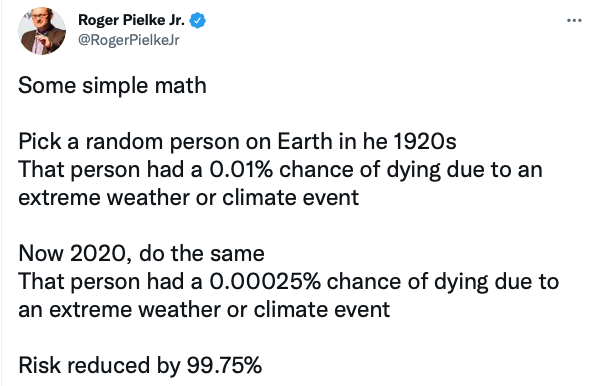 We may not be any better at preventing extreme weather events, but we are much better at surviving them.

Without action on climate change, Hurricane Ida is just the beginning

Aussie PM “leading the way” on Climate Change – Watts Up With That?