People stand next to the red-painted “glacier bus,” a 15-meter-long bus fitted with massive tires, at Langjokull ice cap in Iceland, on October 1. Photo: AFP 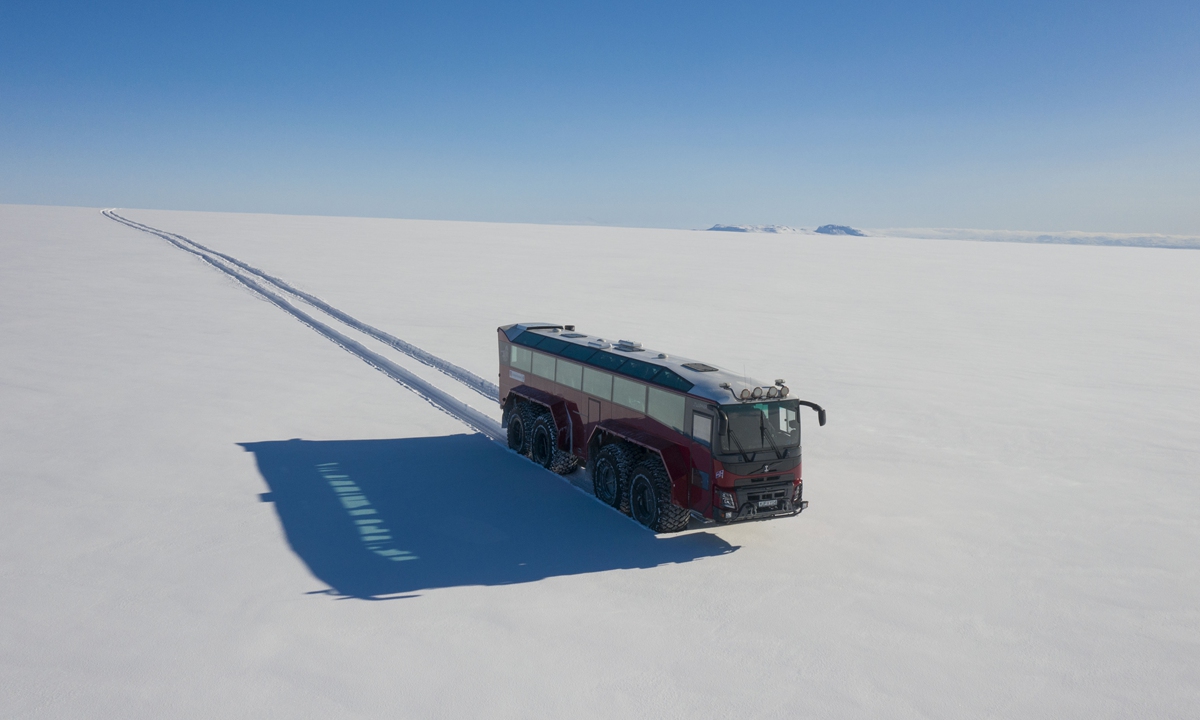 Instead of a slow slog on snowshoes, a giant bus sweeps passengers at up to 60 kilometers an hour across Iceland’s second largest glacier, which scientists predict will likely be nearly gone by the end of the century.

The red glacier mega bus is 15 meters long and fitted with massive tires for traction across the powder snow of western Iceland’s vast Langjokull ice cap.

The glacier formed around 2,500 years ago and, with melting and refreezing, glaciologists believe the oldest ice of the glacier to be 500 years old.

From its highest point, at about 1,450 meters, the spectacular view takes in other snow covered peaks, including the Okjokull, the country’s first glacier officially lost to climate change in 2014.

With its 850 horsepower engine, the tour bus – resembling something out of a science-fiction movie – smoothly traverses the icy terrain on eight wheels, each two meters in diameter.

It has been named “Sleipnir” after the mythical eight-legged horse ridden by the Norse god Odin.

As strong winds whip up the fresh snow on an October day, the bus – created by keen mechanic Astvaldur Oskarsson, 59, who runs a specialized storage company – climbs higher to emerge from the low cloud into bright blue skies.

An Italian couple are among the few travelers to have braved the double COVID-19 test and five-day quarantine required on arrival in Iceland.

“It feels really emotional. Touching something that is so old, you feel so in contact with the Earth,” Italian Rossella Greco, 30, tells AFP, of the tour, which costs 10,000 kronur ($71).

The bus’ dimensions allow it to cross crevasses three meters wide, though also mean it guzzles 45 liters of petrol per kilometer and leaves deep tracks in the snow.

However, the impact on the glacier “is small as long as it is just one or two vehicles,” according to Thorsteinn Thorsteinsson, a glaciologist at the Icelandic Meteorological Office.

Along the path climbing from the foot of the Langjokull glacier, signs have been erected showing the ice line of every 20 years since 1940 – a reminder of how quickly the glacier is thinning.

Nearly 250 square kilometers of surface area have evaporated since 1890 and the end of the Little Ice Age.

“The elevation of the glacier is getting lower in many, many places,” Gunnar Gudjonsson, a tour guide of 20 years, told AFP.

“So it’s actually new mountains or new nunataks [the ridge or summit of a mountain protruding from an ice field] coming out of the glaciers,” he added.

“It’s incredible how fast it is melting.”

In August, the dam of a glacial lake, formed by melt water, broke, causing flooding.

“It was not a major event but it happened in a region where we are not used to such phenomena,” Thorsteinsson said.

Powerful floods called jokulhaup are normal around the Vatnajokull glacier, the biggest in Iceland and also in Europe.

These however are generally due to volcanic activity.

But floods are bound to occur more regularly on glaciers elsewhere in Iceland, as global warming accelerates the melting.

“If this continues in a similar way or even in a still warmer climate, then it’s very likely that all of Langjokull, or maybe 80 to 90 percent of it, will be gone by the end of this century,” he said.

More things we don’t know about the Chinese virus #coronavirus

Measuring melting ice – Watts Up With That?

Fall is getting warmer in Philly. Here’s what that means for trees, ticks, and birds.