Seeking knowledge about the warming world around them, more and more concerned young college students are landing in the undergraduate climate change class at USC.

They come from across the university and the world: law students, art majors, aspiring filmmakers, business students, journalism majors and more. They aim to fulfill a general education science requirement yet quickly discover that the Earth — its climate and history, its natural systems and biological occupants — is an immensely complex place.

Professor Lowell Stott has taught GEOL 15o Climate Change in the Department of Earth Sciences of the USC Dornsife College of Letters, Arts and Sciences for 15 years. He’s seen a marked increase in interest in recent years: Enrollment is up from about 50 students when he first started teaching the class to 135 this year.

“There’s a clear transformation taking place among the students. They are coming to the issue now fully engaged, and it’s because they see the full implications of climate change as it will impact their future. They embrace it as a generation-defining issue,” he said.

The students come for lots of reasons. One wants to explain the evidence for global warming to skeptical parents. A business student wants to grasp how climate risks will affect securities markets. A young man who grew up reading Robert Frost in the British countryside wants to better understand nature. A student from India wants to help her country live more sustainably.

They come to learn more about what they already believe, for they feel confident climate change is occurring and manmade but don’t fully understand why or how it works. They know it will affect their lives and families. They wonder when the planet will reach the point of no return.

Many are scared, dreading the future. They feel cheated by forces outside their control. They are angry, hopeful, curious and haunted. And they want to do something — now.

The biggest climate protests in history were led by young people this summer, as some 7 million students marched in 150 countries to demand action to stop global warming. The worldwide student climate strikes were keyed by Greta Thunberg, the Swedish teen determined to make adults accountable for overheating the planet. She delivered a powerful appeal before the U.N. Climate Action Summit in New York in September. Meanwhile, some 200 USC students rallied in front of Tommy Trojan.

Sophomore Faith Florez says that climate change activism is simply a part of life for her generation. (USC Photo/Gary Polakovic)

Faith Florez, a USC English major and student in the climate class, identifies with the movement. She sips water from her refillable bottle under a sycamore tree on the USC University Park Campus. It’s a leafy and comfortable world removed from her home in the smoggy San Joaquin Valley, where her parents are farmworkers. And it’s a campus of young people with a shared worldview of a climate threat to their future.

“I haven’t met anyone my age who’s a climate science denialist,” Florez said. “Activism on this issue for our generation is simply a part of our lives. We feel anxiety, urgency and helplessness. We feel so small compared to how big the threat is. I think about ways climate will impact my children. I want them to breathe clean air and not worry about the state of the planet.”

Climate change: world’s iconic landmarks that are at risk

She took the course to better understand the issues and learn what she can do to help. She appreciates how the class has grown, but it’s not enough. She wants to see many more students enrolled.

One young man taking the class sees cinema as a solution. His name is Josh Greene. He is intense and thinks big, an aspiring filmmaker who wants to reach people — lots of people — with movies about the environment.

“Film is one of our best tools to combat climate change, and in the 2020s, we’ll see a rise in environmental cinema,” he said. 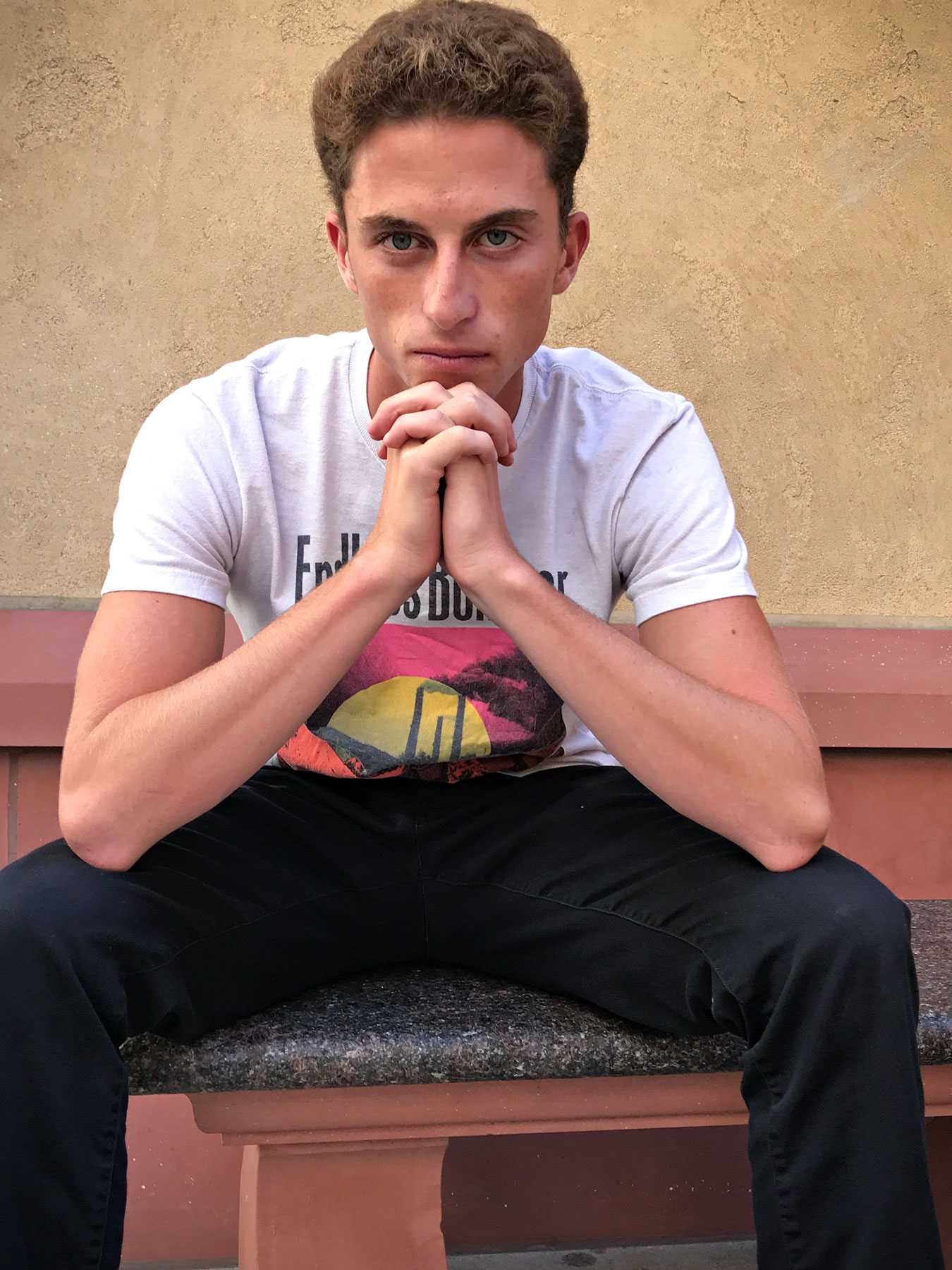 Josh Greene, a sophomore majoring in film production, plans on using cinema as a means for communicating what he cares about. (USC Photo/Gary Polakovic)

Greene grew up immersed in the sea, a San Clemente surfer. He fears the oceans will suffer from accumulating so much heat. For a surfer, climate change represents a threat to both culture and lifestyle. He sees the climate class as the best class at USC to inform the films he wants to make.

“Too many people are ignoring the facts about climate change,” he said. “The solutions are moving too slowly. What are we going to do about it? Old ways have to die if society is going to prevail over this threat. We’ll see horrific devastation in the next few decades, so we have to do all we can and put everything we have into this fight.”

Liorah Goldsmith came to USC with a deep environmental ethic forged during family camping trips. She grew up in the San Fernando Valley and is studying journalism at USC. She took the climate class to understand science, how the Earth works and what the challenges are. Nearing the end of the semester, she now realizes how daunting it is. 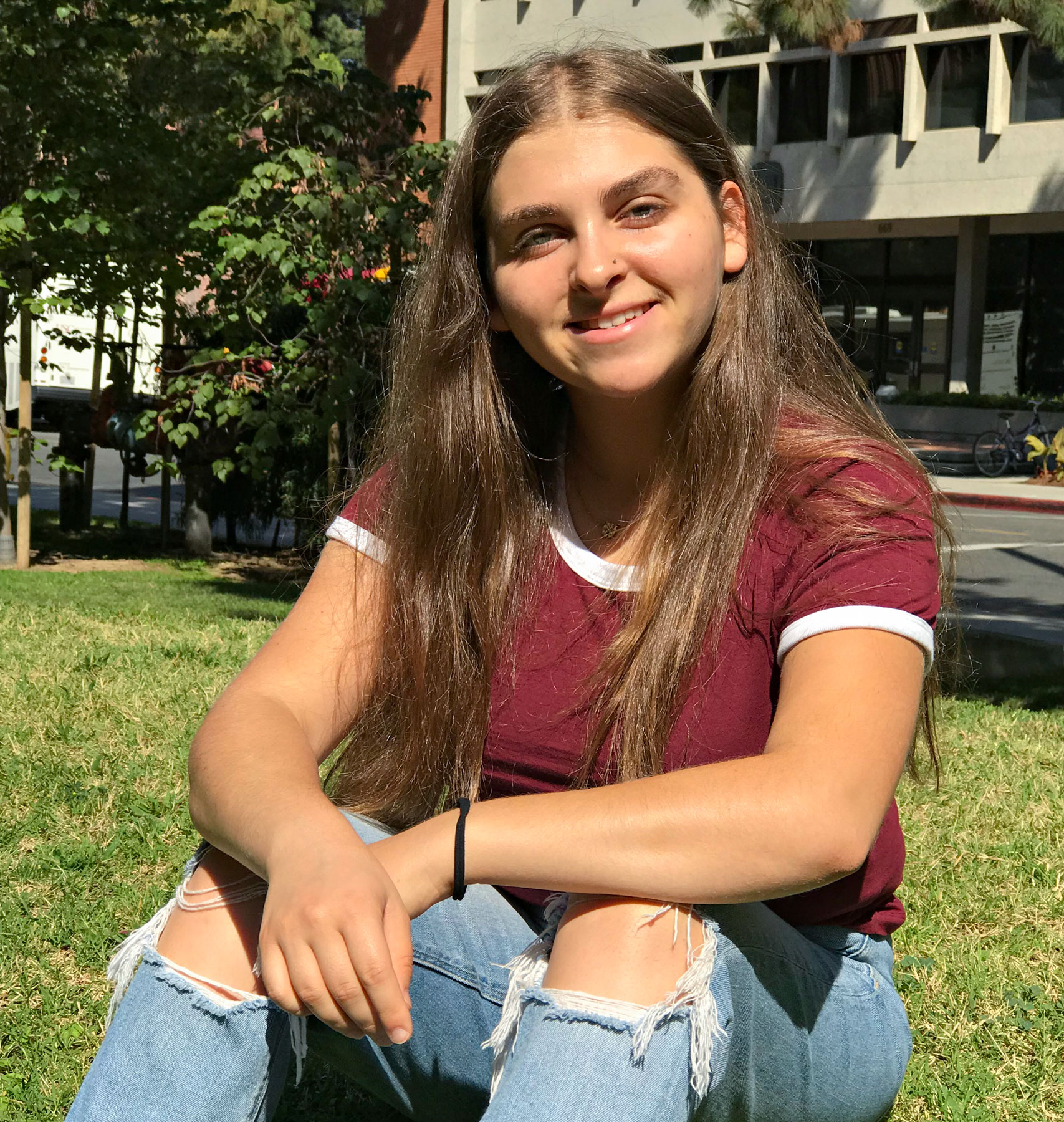 Journalism major Liorah Goldsmith is taking the climate change class to understand how the Earth works and the environmental challenges we are facing. (USC Photo/Gary Polakovic)

“This issue is not just about us, but we’re the first generation of many who will have to care about the issue,” she said. “We have to be able to respond, so when my kids ask, ‘Did you do something about this?’, I can say, ‘Yes, I did.’”

Students coming to this climate change class looking for policy solutions or activist agendas can be disappointed. It is a science class. Many of the students are non-science majors who are taking the course for a general admission requirement; they groan under the complexity and scale of the subject matter.

“Students hear about climate change and global warming, but they don’t understand what it is, how the climate system works or how the Earth responds,” Stott said. “So we focus on building the scientific foundation.”

Planet Earth became foundational for Stott during his childhood years in Utah visiting colorful canyonlands; his ancestors were among the pioneers who settled the state. He began his academic career as a business major at Ohio State University in the 1970s and took an Earth science course because he wanted to understand how mountains formed. That course changed his career and life path. The planet would become his lab.

Students hear about climate change and global warming, but they don’t understand what it is.

Stott’s research focuses on prehistoric climate changes and how the Earth regulates its climate with and without human activities. He studies past climate change as a key to understanding today’s warming world. He was part of the research team in the 1980s that showed how greenhouse gases in the oceans triggered the best-known example of a rapid warming caused by the release of geologic carbon, the Paleocene-Eocene Thermal Maximum (PETM). This was a major global warming event that occurred about 55 million years ago and changed the planet forever. During the PETM, the Earth warmed by 9 to 16 degrees Fahrenheit (5 to 9 degrees Celsius) within about 10,000 years. In that hothouse world, palm trees, hippopotami and alligators flourished in the Arctic — just a few of the dramatic changes that accompanied this era of global warming.

Stott’s been teaching at USC for 30 years and has taught the climate change class for half his tenure. He wants students to be ready for the warming world ahead.

“I tell the students at the beginning of the course: we are trying to give them the tools to participate in decision making, wherever they go after USC,” he said.

Climate change: world’s iconic landmarks that are at risk

Open letter from a concerned researcher on #coronavirus #covid-19

GM Warns Chevy Bolt Owners Not to Park Within 50ft of Anything You Care About – Watts Up With That?

Green Britain faces food shortages as energy crisis shuts down factories – Watts Up With That?

If we don’t act, climate change could devastate Coachella Valley, too