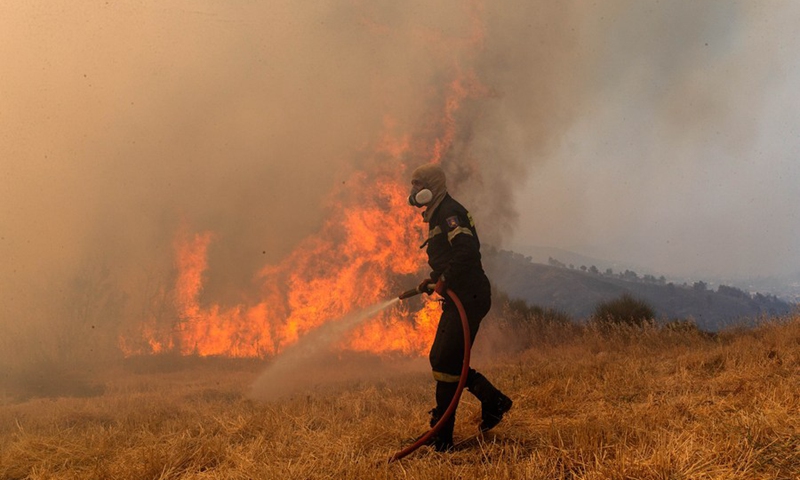 A firefighter tries to put out a fire in Afidnes, some 30 kilometers away from the Greek capital of Athens, on Aug. 6, 2021.(Photo: Xinhua) 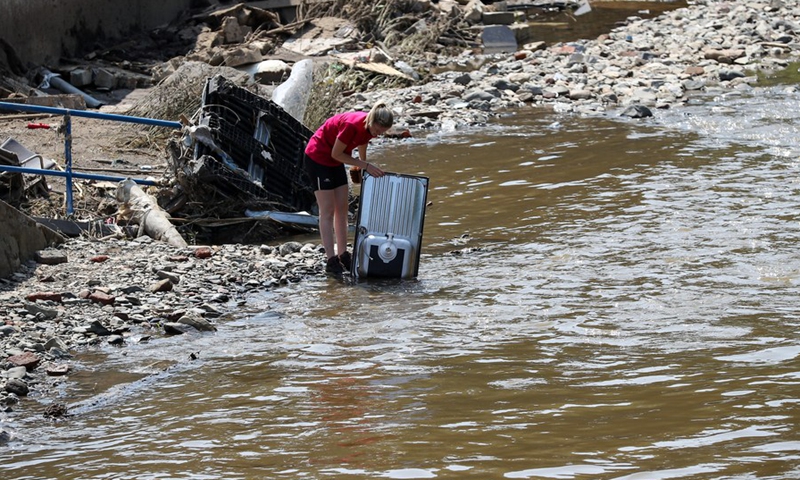 A resident cleans furniture in Pepinster, Belgium, July 20, 2021. Belgium is affected by floods and clean-up is under way to help the hard-hit regions recover from the destructions.(Photo: Xinhua) 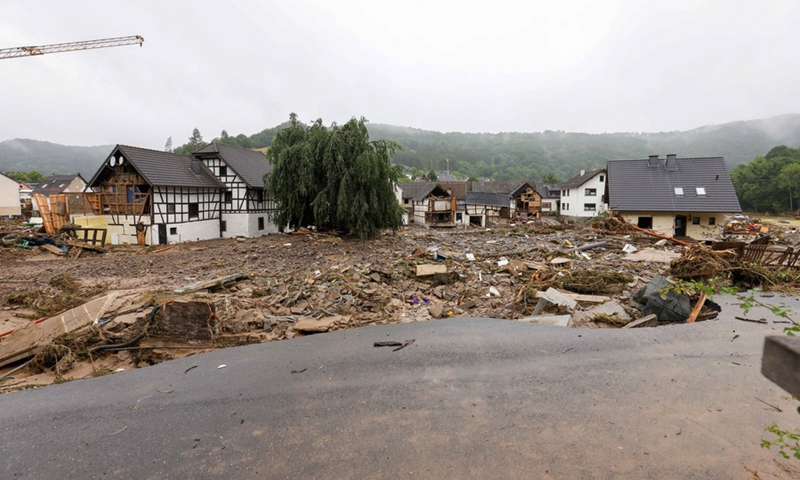 Unusually hot and dry weather in much of southern Europe together with heavy rainfall in other parts of the continent are combining to produce one of the most challenging summer seasons in years.

Reports across southern Europe, from Italy to Greece and Turkey, show record or near-record high temperatures. The weather condition has sparked wildfires on the Italian island region of Sardinia, prompting local officials to evacuate hundreds of residents and declare a state of emergency. In Greece, the capital city of Athens and its famed Acropolis have been shrouded in heavy smoke for days, with firefighters working around the clock.

“The country is facing an unprecedented environmental crisis, with multiple large fires,” Greek Prime Minister Kyriakos Mitsotakis told journalists on Thursday after visiting the site where the ancient Olympics were held. More than a dozen villages in the area had been evacuated for safety reasons.

They confirm the fact that “heat is becoming more of an issue for cities, one that we have to take seriously,” Myrivili told Xinhua. “We have to start mobilizing.”

Massive fires have also prompted evacuations in Turkey and Albania. In North Macedonia, the government declared a 30-day state of crisis while it confronts wildfires, while on the island of Malta, residents have experienced record-high temperatures.

In Romania, the capital city of Bucharest this week experienced its highest temperatures in years, something local climatologist Roxana Bojariu said was partly due to global warming.

While some parts of Europe are burning, other parts are being drenched by unseasonal rainfall. In recent weeks, Germany, Belgium, and Switzerland have all been hit by heavy rains that have left dozens dead, and damaged buildings and key infrastructure.

Like many expert observers, Virginijus Sinkevicius, European Commissioner for Environment, Oceans and Fisheries, put the blame for the extreme events on climate change, calling on countries to take strong action.

“We are fighting some of the worst wildfires we have seen in decades,” Sinkevicius said via social media. “But this summer’s floods, heatwaves, and forest fires can become our new normality. We must ask ourselves, is this the world we want to live in? We need immediate action … before it is too late.”

Most experts agree that while it is impossible to link any one specific weather event to climate change, there seems to be consensus that the frequency and intensity of such events have been accelerated by climate change.

Luca Iacoboni, head of the climate and energy office for Greenpeace Italy, an environmental lobby group, said there was little doubt about the severe impacts of climate change.

“It’s no longer accurate to describe these trends as instances of bad weather,” Iacoboni told Xinhua. “They are climate emergencies and should be treated as such. What we are seeing in Europe is the same kind of phenomenon we have seen in the past in the Philippines or in California. The world must take notice and work together to reduce these threats before it is too late.”

Greenland melting likely increased by bacteria in sediment – Watts Up With That?