Edgar McGregor began picking up litter daily at the Eaton Canyon Natural Area Park and Nature Center in Los Angeles County in May 2019. He said on March 5, 2021, that it was finally clear of municipal waste. 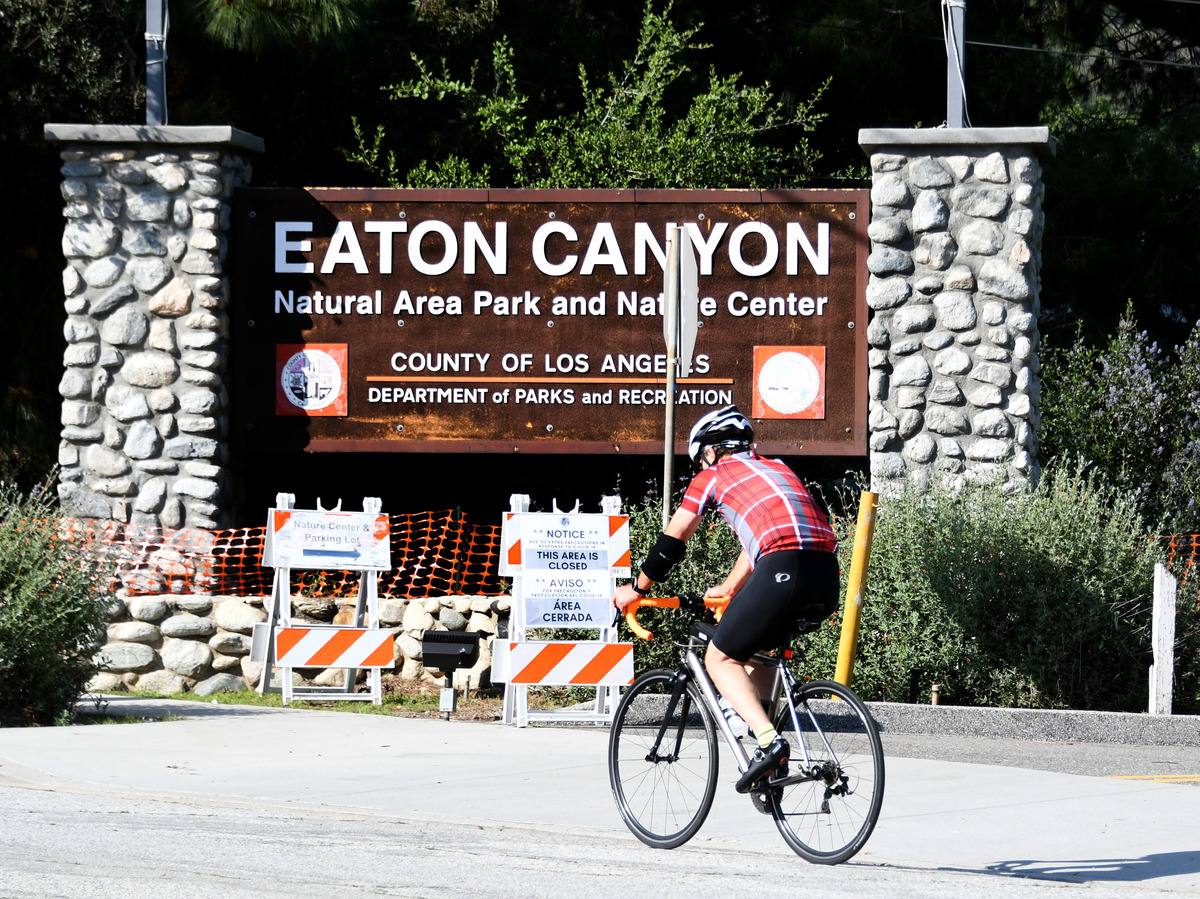 Edgar McGregor began picking up litter daily at the Eaton Canyon Natural Area Park and Nature Center in Los Angeles County in May 2019. He said on March 5, 2021, that it was finally clear of municipal waste.

After spending 589 consecutive days picking up litter at one of Los Angeles County’s most popular hiking spots, 20-year-old Edgar McGregor says the park is clean of municipal waste. But his job is far from over.

The climate activist, who says he has autism, made the trip to Eaton Canyon — part of the Angeles National Forest in southern California — throughout the pandemic and in extreme weather, picking up litter left behind by visitors and posting his progress on social media.

He announced on Friday that there was no more trash to be found, but that he plans to return several times a week for maintenance while also turning his attention to new parks.

I’ve been asked several times today what inspired me to pick up trash in my local park every day for almost 2 years.

Let me give you a hint: pic.twitter.com/ry44oGxhnk

“Not worrying about litterbugs and simply immersing myself in this work has made me more excited than ever to go out every single day and pick up,” McGregor told NPR over email. “There is nothing more satisfying than seeing brand new animals return to your park after months of cleaning up. I highly encourage anyone with any spare time to give this mission a shot. Your parks need you.”

McGregor documented the entire process in photos and videos posted daily to Twitter. He encourages his more than 17,000 followers to go on pickup expeditions of their own, and reposts their photos shared under the hashtag #EarthCleanUp.

The Los Angeles County Department of Parks and Recreation did not respond to NPR’s called or emailed requests for comment.

McGregor says his journey was sparked by an Olympic dream — of sorts. He told NPR that when he learned Los Angeles would be hosting the 2028 summer games, he worried that its litter-cluttered national forest would become a “global embarrassment,” and took it upon himself to start cleaning.

He decided to start with Eaton Canyon, the closest of the Angeles National Forest parks to where he lives. It boasts miles of crisscrossing trails, popular waterfalls, 11 storm drains, seven homeless encampments, five entrances, four parking lots and more than two miles of streambeds, according to McGregor.

McGregor said he initially thought that cleaning the park would take ten to 20 days. It took more than a year and a half.

Here is an updated compilation of my most extreme trash pickups.

If I can clean up in these conditions, I know a majority of you can go out to your local parks to clean up a bit too. This IS a socially distant activity. #EarthCleanUp pic.twitter.com/yxkcltrtlg

“In May 2019 I decided to bring out one to two buckets per day and pick up trash,” he said in a video posted Friday. “Whether it was 117 degrees or if it was raining ash and the mountains were on fire, or if it was pouring down rain, it didn’t matter. I was out here for at least an hour, every single day, cleaning up my park.”

He said he ventured out after working 12-hour warehouse shifts; in extreme weather, including during the state’s record heat wave in September; after a January snowstorm; and even while the other side of the park was “actively on fire.” He injured himself more than once in the process.

Equipped with sneakers, buckets and a pair of gloves, McGregor took a thorough and targeted approach, keeping track of his progress and returning often to dozens of specific locations.

“Some places were very dirty, but if I returned to them months later, they were still clean,” McGregor said. “Other places would get dirty every single week, and I’d need to clean them up dozens of times per year. Throughout all of this, I learned where every single canyon, tree, and bush was in my park.”

So far during my 580 days cleaning up trash in my local park, I have pulled out $377.74 worth of plastic bottles, aluminum cans, and glass bottles.

Of course, all money is donated somewhere, some of which back to my park in the form of native tree saplings. https://t.co/4ZEkSLNrIi pic.twitter.com/3X0Q2mpldn

McGregor collected all kinds of litter deposited throughout the ages, from multiple iPhones to a beer can from the 1970s. He says that he turns all of the recyclables in and donates the money — about $30 every two to three weeks — to charity.

He tweeted on Monday that he surpassed $400 raised through recycling pickups, all donated to planting native trees in the park, supporting charities across the world and political candidates who pledge to act on the climate crisis. McGregor said he donated in February, for example, to the nonprofit World Central Kitchen, and in March to a fundraiser aiming to install solar panels at rural schools in Uganda.

On his largest solo cleanup day in mid-December, McGregor spent 300 minutes clearing an area less than one acre in size. He filled a previously empty dumpster to the brim with more than 1,000 pounds of trash.

McGregor, who has described the work as “addicting,” said in a March 2 tweet that he wakes up every morning looking forward to his daily trash pickup.

“Maybe it is because I am autistic and can really connect with nature, but I seriously love these things,” he wrote. “I implore you all to give a similar mission a try. It’s a socially distant activity.”

These are my maps for my last two cleanups:

To clean up THIS MUCH of my park and bring home only two buckets for each trip is incredible. I covered huge ground in the last 48 hours.

I have nowhere else to clean in my park. I’ve checked everywhere. It’s spick and spam! pic.twitter.com/rUWKDPE4a3

After months of what he described as “static” park cleanliness, McGregor noticed several weeks ago that he was running out of locations to clean — even the spots that were usually reliable sources of litter were mostly empty.

The first major milestone came on Thursday, when McGregor said he walked “aimlessly” around the southern half of the park for four hours, checking as many locations as he could but only filling two buckets with waste. When the same thing happened in the northern half on Friday, McGregor said he knew the park was clean.

Social media users cheered McGregor’s achievement, with thousands liking and sharing his video. Among them was Greta Thunberg, the Swedish environmental activist who has become internationally known as the face of the climate strike movement.

McGregor plans to return to Eaton Canyon two or three times a week for maintenance, at least while hiker reservations are still limited due to COVID-19. (Access to the trail and natural area is currently available by reservation only due to the pandemic.) That’s on top of his plans to pick up litter three to four days a week in other parks that desperately need it. He’s already started, and encourages others to do the same.

“Climate action is a group project,” he tweeted. “There will be no hero that will emerge from the fog to save us from ourselves. To preserve this planet, we’ll need a billion climate activists.”

McGregor says he is headed to San José State University this fall, where he will pursue a degree in meteorology with an emphasis in climate science.

Opinion: A Warning from the Dawn of History Echoes in Today’s Debate Over Climate Change

Global warming from a kid’s perspective |

Northern Hemisphere summers may last nearly half the year by 2100

Sleepwalking to Green Austerity – Watts Up With That?

Opinion: A Warning from the Dawn of History Echoes in Today’s Debate Over Climate Change

Global warming from a kid’s perspective |

Sleepwalking to Green Austerity – Watts Up With That?

Chinese and Indian Climate Policy Power Crisis Worsens – Watts Up With That?

Trouble in the Air – Environment Maine

Covid Has Replaced Climate Change As The Left’s New Religion