BANDAR SERI BEGAWAN, Brunei — Ferry Slik hops into his jeep and heads west out of Brunei’s capital. After an hour on the well-paved highway, he pulls up on the road shoulder and parks, seemingly in the middle of nowhere.

But the Dutchman, who has lived in Brunei since late 2013, knows exactly where he is. Leaving his car, he slips into the Andulau Forest Reserve. Expertly picking his way over logs swarming with ferocious-looking ants and dodging vines as thick as thumbs, the botanist finds the men he is looking for in about 20 minutes.

One is perched atop a tall aluminum ladder with a pair of calipers in hand, measuring a thick tree trunk. He calls out numbers and a teammate below scribbles them down, noting other details such as the tree’s coordinates and that it was still alive. Meanwhile, a third man nearby scoops a bit of soil into a small plastic tube.

Every dry season since 2016, Slik and his team have spent up to eight weeks surveying some 560 large trees in this 15-hectare forest plot. The treks have continued into 2021, as COVID-19 has left the tiny oil-rich Southeast Asian nation relatively unscathed.

By noting each tree’s diameter, its ambient soil and climate conditions, and other measurements, Slik and his colleagues seek insights into “how big trees live, grow and die,” as he puts it. Just this month, the University of Brunei Darussalam professor published a new study on growth rates, adding a little more to the world’s still-limited understanding of these natural giants.

But the stakes are much higher than merely satisfying academic curiosity: Big trees are both vulnerable to climate change and critical in our fight against it. And their numbers are dropping.

Slik and his colleagues take a range of measurements, seeking insights into “how big trees live, grow and die.” (Photo by Sandy Ong)

Found all over the planet, some big trees exceed a mind-boggling 100 meters in height and 9 meters across. Iconic species include the giant sequoias and California redwoods on America’s West Coast, as well as the mountain ash of southern Australia.

In Asia, most big trees — loosely defined as those with a girth of at least 50 centimeters, or the top 1% of trees in a given forest — belong to the dipterocarp family, which can easily grow up to 60 meters tall.

Dipterocarps are highly prized because they make for sturdy furniture.

“Foresters have been studying commercial tree species for quite a while, but their main focus is on the timber quality,” Slik told Nikkei Asia. “And they only cover just a fraction of the large tree species.”

There is still much to uncover. “We don’t even have a good overview of how big most tropical tree species can become and how this is related to their evolutionary history or specific traits that they have,” he said.

There is little doubt about the trees’ importance, though.

“There’s no question that the biggest trees in forests play an outsized role in the functioning of an ecosystem,” said Stuart Davies, director of the Forest Global Earth Observatory (ForestGEO) at the Smithsonian Institution in Washington. “Although forest giants may comprise just 1% of all trees, they often account for more than half of a forest’s total biomass. And if they change, there are serious repercussions.”

Big trees help regulate a forest’s carbon and nutrient cycles, alter the amount of rainfall and groundwater available, and determine how much sunlight smaller trees in the understory receive.

“They also support huge amounts of diversity,” said Matt Bradford, a botanist at Australia’s Commonwealth Scientific and Industrial Research Organisation (CSIRO). “Many animals, plants, and insects live in the hollows and the flowers and in all branches.”

Moreover, big trees store an immense amount of carbon, taking it out of the atmosphere and locking it away for hundreds of years. Because forest giants are increasingly recognized as an important buffer against climate change, there is now “huge interest in them” compared with a decade ago, according to Bradford.

Worryingly, however, big trees are on the decline worldwide. In California’s Yosemite National Park, for instance, their numbers fell by 25% between the 1930s and 1990s. In Australia, the mountain ash population is predicted to shrink to 0.6 trees per hectare by 2070, down from 5.1 in 1997.

The biggest culprit — a factor that has remained unchanged for 40 years — is deforestation, said Arshad Ali at Nanjing Forestry University.

Deforestation can also exacerbate the effects of a second threat: drought-like conditions. Logging often leaves a forest in fragments, and trees on the edges of these small patches tend to be exposed to drier and windier conditions.

“Big-sized trees have a hydrological system that is very sensitive compared to small-sized trees,” Ali said. Higher temperatures mean thirsty trees have to work harder to draw water up from the ground to their leaves — an already stressful task when a tree is 20 stories high. “In Southeast Asia, El Nino Southern Oscillation, or ENSO, events are often associated with drought,” said ForestGEO’s Davies. “These droughts often cue heavy flowering in the forest, but may also lead to increases in tree mortality.”

Big trees, he added “may be especially vulnerable to these droughts.”

Indeed, one experiment conducted in a small forest plot in the Amazon found that when drought conditions were simulated, larger canopy trees were 4.5 times more likely to die — double the rate for smaller trees.

While global warming may spell further trouble, Bradford said it is unlikely we will see the effects of climate change on big trees in our lifetime. “Not unless there’s an incredibly rapid increase in temperature and rainfall, which starts killing the trees outright,” he said.

Even so, he stressed, that does not mean we can rest idle. “We have to address climate change because it’s creeping up and there’s still huge areas of forests left that we want to keep servicing,” he said. “The predictions are that climate change is going to make big trees grow faster and die faster. But how much faster, we’re not sure yet.”

Which is why forest plots such as Slik’s in Brunei are vital. “There are very few plots dedicated specifically to studying large trees,” Slik said, noting he was only aware of one comparable location in Costa Rica. “But their site is very different from ours because it is in the seasonal tropics and also because they only have about 30 species of big trees, whereas our plot contains 131 species.” 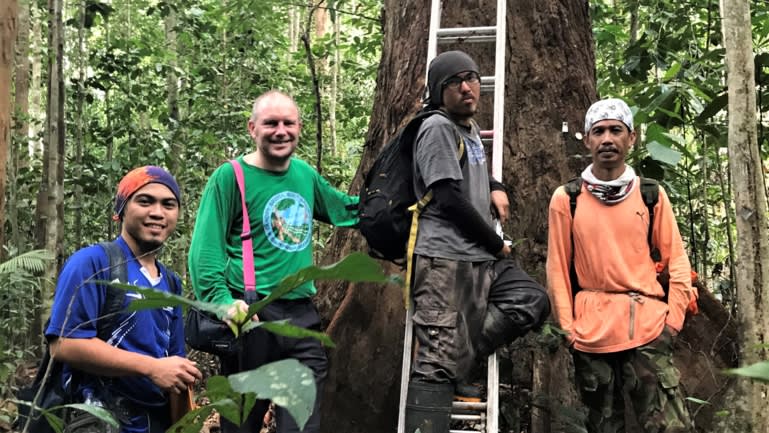 Slik and his team: He recently published a study showing how Andulau’s big trees grow at the same rate despite differences in soil fertility and water availability. (Photo by Sandy Ong)

Additionally, there are other plots throughout Southeast Asia, as well as China and Australia, that are home to big trees but where research is not solely dedicated to studying them.

Experts hope that, collectively, research at all these sites will help solve the many mysteries surrounding big trees. Slik has made some headway: The study he published this month, in the journal Biotropica, details how trees in different parts of his Andulau plot grew at the same rate despite variations in soil fertility and water availability.

Davies said it is good news that these natural wonders are attracting greater attention, though he cautioned that we have to be careful not to miss the forest for the trees. “Big trees are nice because they’re so iconic, but the forest is much more than the big trees. It has all these other bits and pieces — like primates, hornbills, and all the tiny bugs and microbes — that we have to keep in mind too.”

Still, he said, the big trees “hold the whole thing together.”

Social Cost (Benefit) of Carbon Dioxide from FUND with Corrected Temperatures, Energy and CO2 Fertilization – Watts Up With That?

Global warming could pass 1.5°C within the next five years

Global warming could pass 1.5°C within the next five years

Why the Arctic matters – Atlantic Council

Globe Expected To Continue Cooling Into Next Year, Extending Cooling Streak To 7 Years – Watts Up With That?

Keeping Trash Out of the Great Lakes: EPA Awards over $725,000 to Address Trash in Lakes Erie and Michigan